How the best Restaurant in Larchmont Village is redefining Happy Hour

All around LA, restaurants are seducing early-bird diners with ethereal drinks and chic little bites.

What do ladies’ social clubs, the US Navy, and Prohibition all have in common? Happy hour. The phrase first came into popular usage late in the 19th century to describe gatherings for so-called “ladylike” pursuits such as book clubs and afternoon tea. After World War I, American sailors co-opted it to encompass regularly scheduled periods of entertainment, including boxing matches and musical performances, to relieve the tedium of day after day on the high seas.

The term then became associated with a preprandial tipple during the teetotaling temperance of Prohibition, when fancy folks would slip into a speakeasy for a drink before sitting down to a dinner sans alcohol. And today, happy hour is back big-time at some of LA’s best restaurants, where it means specialty drinks and bites—usually at a fraction of the cost of the normal menu.

New executive chef (and French Laundry alum) Kevin Kathman has helped revive The Larchmont (5750 Melrose Ave., LA, 323-464-4277), thanks in part to his penchant for foraging. According to Kathman, “You can expect to see modern, whimsical plays on some happy-hour classics, such as rabbit ‘nuggets’ with sauce verte and wild salmon tartare with wasabi emulsion and wakame seaweed salad.” Among the ingredients he is currently plucking from the wild are morels, ramps, fiddlehead ferns, and watercress.

The Larchmont mixologist Chris Kramer has gotten in on the foraging as well with new summer cocktails to pair with Kathman’s plates. “The Walk in the Woods incorporates my own trademark triple threat of gin,” says Kramer, “a snappy, dry Citadelle copper-kettle gin, a purple-sage gin by Ventura Spirits, and Uncle Val’s lavender botanical gin.” He created it to complement a smoked sturgeon dish with cold potatoes, fennel shavings, and caviar. The drink is served in a chilled coupe with foraged dill, fennel, and chives, which are also incorporated into the dish. 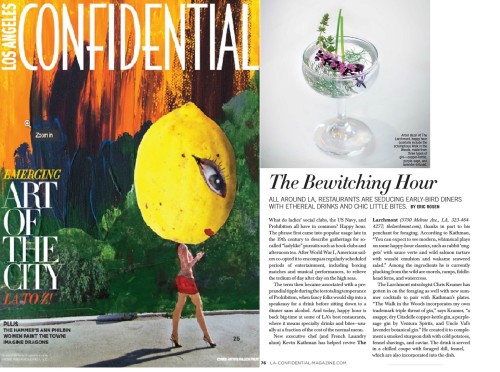